Due to the different phosphorescent materials used, different colors of light can be emitted on the screen. Generally, oscilloscopes use green light-emitting oscilloscopes to protect people's eyes.

The electron gun is composed of a filament (F), a cathode (K), a grid (G1), a front accelerating pole (G2) (or a second grid), a first anode (A1), and a second anode (A2). Its role is to emit electrons and form a very fine high-speed electron beam. The filament energizes the cathode and the cathode emits electrons by heat. The grid is a metal cylinder with a small hole at the top and is placed outside the cathode. Since the gate potential is lower than that of the cathode, it controls the electrons emitted from the cathode. Generally, only a small amount of electrons with a large initial velocity can pass through the gate aperture and rush to the phosphor screen under the action of the anode voltage. Electrons with a small initial velocity still return to the cathode. If the gate potential is too low, all of the electrons return to the cathode, ie the tube is turned off. Adjusting the W1 potentiometer in the circuit can change the gate potential and control the electron flux density that is directed to the screen to achieve the brightness of the bright spot. The first anode, the second anode, and the front accelerating pole are all three metal cylinders on the same axis as the cathode. The front accelerating pole G2 is connected to A2, and the applied potential is higher than A1. The positive potential of G2 accelerates the cathode electrons toward the phosphor screen.

The electron beam passes through the focusing process twice from the cathode to the phosphor screen. The first focus is done by K, G1, G2, and K, K, G1, G2 are called the first electron lens of the oscilloscope. The second focus occurs in the G2, A1, and A2 regions, and the potential of the second anode A2 is adjusted so that the electron beam can just converge on the phosphor screen, which is the second focus. The voltage on A1 is called the focus voltage, and A1 is called the focus pole. Sometimes adjusting the A1 voltage still does not satisfy the good focus. The voltage of the second anode A2 needs to be fine-tuned. A2 is also called the auxiliary focus pole.

In order for the oscilloscope to work properly, there are certain requirements for the power supply. It is prescribed that the potential between the second anode and the deflector is similar, and the average potential of the deflector is zero or close to zero. The cathode must operate at a negative potential. The gate G1 is at a negative potential (-30V~-100V) with respect to the cathode, and is adjustable to achieve luminance adjustment. The first anode is a positive potential (about +100V~+600V) and should also be adjustable for use as a focus adjustment. The second anode is connected to the front accelerating pole, and has a positive high voltage (about +1000 V) to the cathode, and an adjustable range of Â±50 V with respect to the ground potential. Since the current of each electrode of the oscilloscope tube is small, it can be supplied by a common high voltage via a resistor divider. 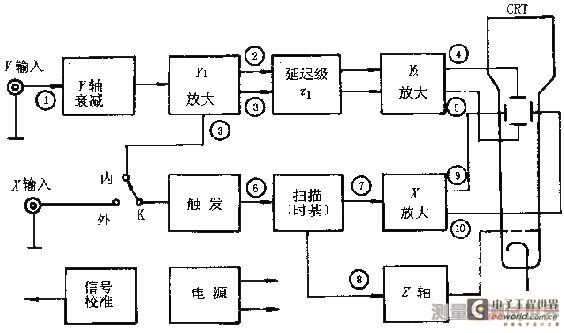 The signal 1 to be measured is connected to the "Y" input terminal, and is appropriately attenuated by the Y-axis attenuator and then sent to the Y1 amplifier (preamplifier) â€‹â€‹to push-pull the output signals 2 and 3. The delay stage is delayed by Ð“1 time to the Y2 amplifier. Amplification produces a sufficiently large signal 4 and 5 to be applied to the Y-axis deflection plate of the oscilloscope. In order to display a complete stable waveform on the screen, the signal D of the Y-axis is introduced into the trigger circuit of the X-axis system, and a trigger pulse 6 is generated at a certain level of the positive (or negative) polarity of the incoming signal to start. A sawtooth scanning circuit (time base generator) generates a scanning voltage 7. Since there is a time delay Ð“2 from the trigger to the start of the scan, to ensure that the X-axis begins to scan before the Y-axis signal reaches the screen, the delay time Ð“1 of the Y-axis should be slightly larger than the delay time Ð“2 of the X-axis. The scan voltage 7 is amplified by an X-axis amplifier to produce push-pull outputs 9 and 10 which are applied to the X-axis deflection plate of the oscilloscope. The z-axis system is used to amplify the sweep voltage forward and become a forward rectangular wave that is sent to the oscilloscope gate. This causes the waveform displayed in the scan forward to have a certain fixed luminance, while the scanning backhaul is used to erase the trace.

The above is the basic working principle of the oscilloscope. The dual trace display uses the electronic switch to display two different measured signals input to the Y axis on the screen. Due to the visual persistence of the human eye, when the switching frequency is high to a certain extent, two stable and clear signal waveforms are seen.

There is often an accurate and stable square wave signal generator in the oscilloscope for calibration oscilloscopes.

The oscilloscope main power switch. When this switch is pressed, the power indicator lights up to indicate that the power is on.

Generally should not be too bright to protect the screen.

The focus knob adjusts the beam section size to focus the scan line to the sharpest state.

Each channel in the oscilloscope has a vertical deflection factor selection band switch. Generally, it is divided into 10 files from 5mV/DIV to 5V/DIV in 1, 2, and 5 ways. The value indicated by the band switch represents the voltage value of one grid in the vertical direction on the screen. For example, when the band switch is placed in the 1V/DIV mode, if the signal spot on the screen moves by one grid, it means that the input signal voltage changes by 1V.

The use of time base selection and fine tuning is similar to vertical deflection factor selection and fine tuning. The time base selection is also realized by a band switch, and the time base is divided into several files according to 1, 2, and 5 ways. The indicated value of the band switch represents the time value at which the spot moves one square in the horizontal direction. For example, in the 1Î¼S/DIV file, the spot moves one frame on the screen to represent the time value of 1Î¼S.

The Fine Tune knob is used for time base calibration and fine tuning. When rotated clockwise to the calibration position, the time base value displayed on the screen matches the nominal value shown by the band switch. Turn the knob counterclockwise to fine tune the time base. The knob is pulled out and is in the scan extension state. Usually x10 expansion, that is, the horizontal sensitivity is expanded by 10 times and the time base is reduced to 1/10. For example, in the 2Î¼S/DIV file, the time value represented by the horizontal level on the screen in the scan extended state is equal to

The TDS test bench has 10MHz, 1MHz, 500kHz, 100kHz clock signals, generated by a quartz crystal oscillator and a frequency divider. It has high accuracy and can be used to calibrate the time base of the oscilloscope.

There are three options for input coupling: AC (AC), Ground (GND), and DC (DC). When "Ground" is selected, the scan line shows the position of the "Oscilloscope" on the screen. DC coupling is used to determine the absolute value of the signal DC and to observe the very low frequency signal. AC coupling is used to observe AC and AC signals containing DC components. In digital circuit experiments, the "DC" mode is generally selected to observe the absolute voltage value of the signal.

The first section indicates that after the signal to be measured is input from the Y-axis, part of it is sent to the Y-axis deflection plate of the oscilloscope, and the driving spot is proportionally moved in the vertical direction on the screen; the other part is shunted to the x-axis deflection system to generate a trigger. The pulse triggers the scan generator to generate a repeated sawtooth wave voltage to be applied to the X-deflection plate of the oscilloscope tube, so that the light spot moves in the horizontal direction, and the two are combined, and the pattern drawn by the light spot on the fluorescent screen is the signal to be measured. Graphics. It can be seen that the correct trigger mode directly affects the effective operation of the oscilloscope. In order to obtain a stable and clear signal waveform on the screen, it is very important to master the basic trigger function and its operation method.

Correct selection of the trigger signal has a great relationship with the stability and clarity of the waveform display. For example, in the measurement of digital circuits, it may be better to select an internal trigger for a simple periodic signal, and for a signal with a complex period and a signal with a periodic relationship with it, the external trigger may be more it is good.

There are many ways to couple the trigger signal to the trigger circuit, in order to stabilize and reliably trigger the signal. Here are a few of the commonly used ones.

The basic functions and operations of the oscilloscope are described above. The oscilloscope also has some more complex functions, such as delayed sweep, trigger delay, XY mode, etc., which are not introduced here. Getting started with an oscilloscope is easy, and true proficiency is mastered in the application. It is worth pointing out that although the oscilloscope has many functions, it is better to use other instruments and instruments in many cases. For example, in a digital circuit experiment, it is much simpler to use a logic pen to determine whether a single pulse with a narrow pulse width occurs. When measuring a single pulse width, it is better to use a logic analyzer.

Spiral ground anchors are widely used in the construction of large poles and towers because of their large torque, short installation period, and stability of different soils.

Install transmission towers in the field

(2) Pull or fix the iron tower and iron column